Go to all Collections 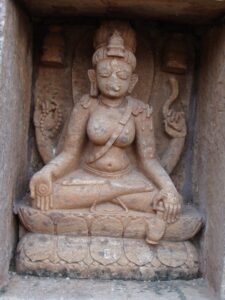 Image of Yellow Tara (Bhrikuti) notices under the niche of Mahastupa at historical site of Udayagiri in Jajpur district, Odisha. Goddess appears with four hands. She is attributed by rosary in upper right hand and an indistinct thing in upper left hand. Her lower right is in varada mudra (boon pose) and lower left hand engage with kamdalu (water pitcher). she sits in cross legged upon a lotus pedestal and bears a stupa over on headgear.Stella is flanked by two miniature stupas.

Sculpture is associated with the Somvanshi dynasty of Odisha (7th-8th century) and revealed from the historical site of Ratangiri, Odisha. Lallitagiri-Ratangiri-Udayagiri sites are popular as the golden triangle and was a great center of Tantric Buddhism and artistic activities during the early medieval period. These sites were contemporary of Nalanda in Bihar. Huge ranges of Buddhist sculptures revealed from the excavations.