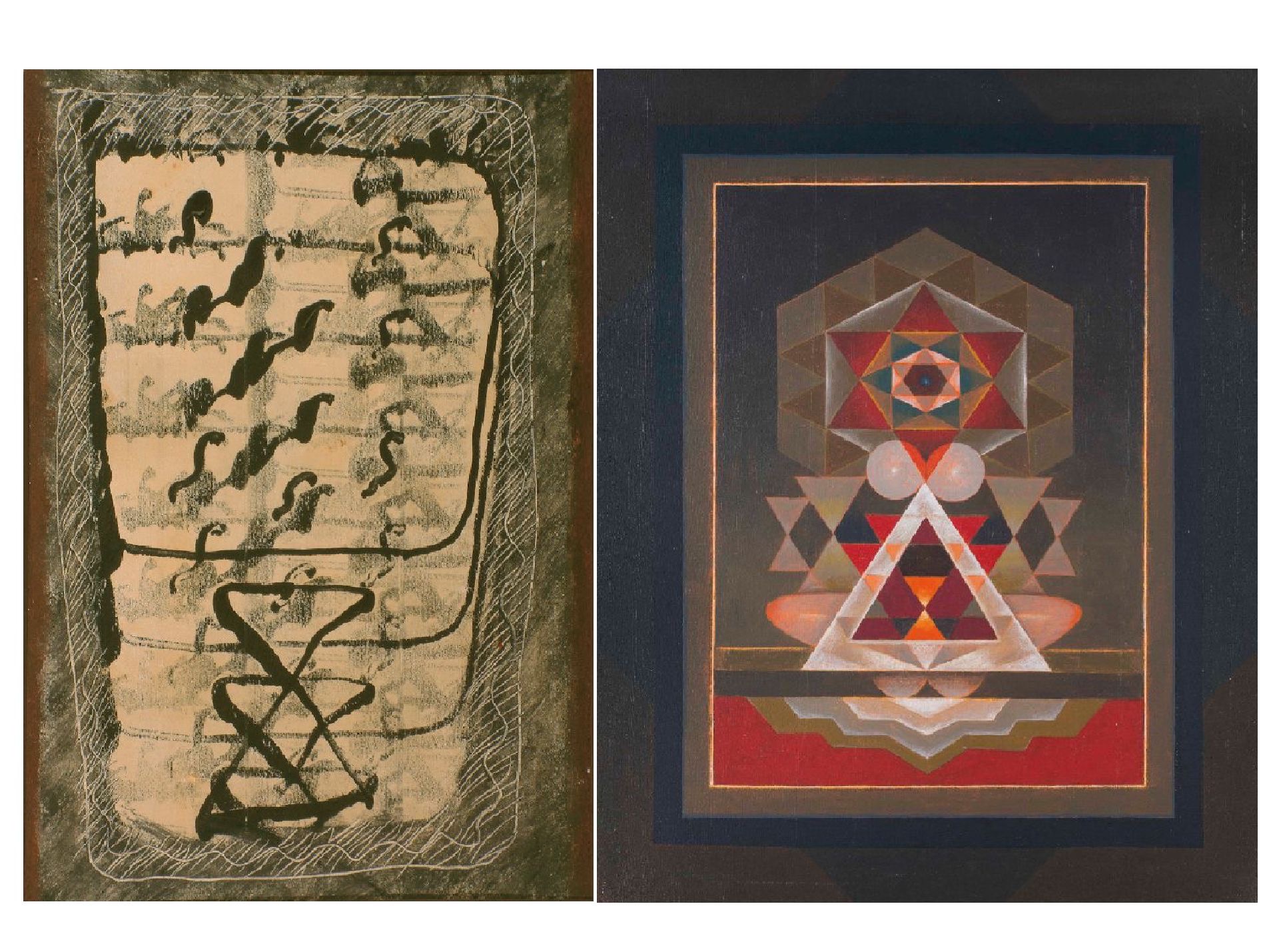 The exhibition presents two artists paintings from 1960 onwards—their approach to abstraction. In the early 60s, beyond art movements and artist groups this period saw a transition between figuration to abstraction. Many artists explored certain identity, not specific to national or ideological, however of individualistic art-making. A search for new visual language emerged across the regional and local landscape of India.

Jagdish Swaminathan (1928-1994) and Gulam Rasool Santosh’s (1929-1997) initial work embodies visual sensibilities and thought processes parallel to a league of artists across the country during this period. A drastic switch in the late-60s and 70s foregrounds their personal and individual break away from the informed images.

hover over image to read the text

Swaminathan and Santosh’s sustained engagement with symbolic abstract draws from indigenous and tantric elements. Swaminathan’s authoritarian but, brief affiliation with collective Group 1890 and Santosh labelled to the art movement called Neo-tantrism are points of departure into their distinct journeys. This exhibition will distinguish both works to show their independent paths to abstraction and their significant contribution to Indian modern art.

They demonstrated experimentations in conceptual and allegorical image-making. Swaminathan’s fascination with space via placement of flat colour advanced to explore geometric expanses in texture. In the act of abandoning narration and excess, he expressed a distinct aesthetics and compositional clarity. Santosh’s art influence stemmed from frequent self-reflection and practice of tantra in his every day. He mainly experimented with basic form— angular lines, point, square, triangle, circle, hexagon synthesised to bold colours signifying alertness. Their painting style can be defined as a survey beyond the manifest world to have explored the non-descriptive and non-linear route.

This exhibition traces the conceptual simplicity and visual ally of the artists’ oeuvres in phases but not limited to structure, symbolism and region.

A combination of symmetry and asymmetry draws not only visual but complex dialogue in these two artistic practices. The pilgrimage was a turning point in Santosh’s early found fascination to religious and sacred Indian traditions. To have frequently translated into his image-making of geometric and symmetrical formulae. Diagrammatic tools of yantra rarely appear direct but to vividly contrasted compositions of human outlines with forms—triangle, petal, hexagon.

Swaminathan’s versions of recurring nature in a tree, bird, insects are a less frequent result of observational dimensions but results to transform to the realms of mystic. His interest to explore the concept of illusory nature of the manifest world and these concerns informed his paintings frequently in Bird, Mountain and Tree series. He devised pictorial tools to display asymmetrical and detailed versions of mountains in aerial views as a metaphor to reflect on infinity.

A poet-critic-painter Swaminathan was born in 1924 in Shimla. A strive for the realisation of space remained at the core of his art practice. In the 1960s, Swaminathan’s approach to pictorial space inquired folk custom and meticulously painted colour expanses to a switch he displayed in Colour Geometry of Space series. Further led him to combine elements from nature—a phase of 1970s-80s conceptual landscape entitled Bird, Mountain and Tree series. This sheer flatness of colour extended meanings of space unified in textures, horizontal, vertical divides ceasing two-dimensionality of the surface towards the late 80s. To the end of life his experiments of sparse tantric expression and calligraphy in mediums of wax, oil, marble dust—recalls his early inclination to motifs and intuitive leanings to abstraction.

Santosh a painter-poet was born in 1929, Srinagar, Kashmir largely self-taught began his career inspired from the Kashmir valley. His early works reflect a Cubistic approach to portrait and landscapes of the valley. In the late-60s a major shift to finding consciousnesses informed his art of placing shapes on vertical axis took to symmetry and balance. More than just symmetrical divides, the 80s was a transition from flat painted geometric fragments to tightly defined imagery of dualistic ideas of the human body. These forms of male and female dissolve leaving hands, face becoming imagery in essence towards the early 90s. Santosh’s geometric engagements evolve to a grounded and firm image not only holding to sacred traditions also leading into the dimensions of unknown forces.

Images are copyright of Sotheby’s Inc. London and New York, Aicon Art, New York and Christie’s, New York. Thank the team members of above three organisations for their effort and time in compiling the images. Thanking the entire team of the Centre for Art and Archaeology, American Institute of Indian Studies (AIIS), New Delhi for their constant support.