Maqbool Fida Husain (1915-2011) was an Indian artist who was known in his lifetime itself as – the Picasso of India. He was instrumental in modern Indian art get the International interest and support that it enjoys today. He was born in 1915 in a village called Pandharpur in Maharashtra in what was then British India. 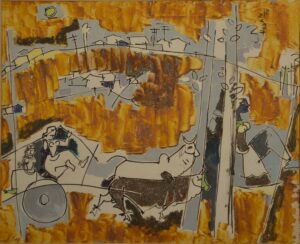 His impact on Indian art can be surmised by the fact that perhaps no other modern Indian artist left such a lasting impression on the collective consciousness as he did making it almost impossible to ever discuss Indian art without his name.

In this exhibition, a set of his five paintings have been selected for display. These paintings were donated to Bharat Kala Bhavan, Banaras Hindu University at Varanasi sometime in 1957 by Raja Badri Vishal Pitti of Hyderabad.

Raja Badri Vishal Pitti belonged to a very wealthy Marwari family in Hyderabad who also was a well known Socialist leader. He was a great connoisseur, patron and promoter of art, literature and music. He was instrumental in encouraging and recognizing the genius of M. F. Husain when he was a young struggling artist and even provided his residence for him to work. Sometime in the early 1960s, an encounter with Ram Manohar Lohia the great Socialist leader and a friend of Badri Vishal Pitti was instrumental in Husain working on his Ramayan series paintings, which brought the artist into greater limelight. Badri Vishal Pitti had a special attachment with Varanasi and its art and literary circle. It was perhaps his close friendship with the founder of Bharat Kala Bhavan Shri Rai Krishnadasa, an eminent art historian and connoisseur that led to these paintings finding their way into the collection of Bharat Kala Bhavan.

The works included here in this exhibition were created before the series on the Ramayana and Mahabharata epics that Husain undertook. However, by this time he had developed his signature style of confident and bold strokes which can be easily seen in them. The most striking feature of these paintings is the usage of bright colours which are applied flat and the archetypal figuration of the subjects, a style that Husain had begun to employ from the 1950s.

M.F. Husain and his early works from Bharat Kala Bhavan 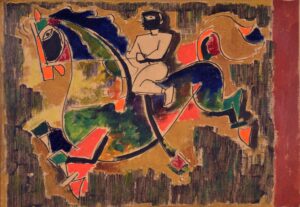 He also liberally applied warm colours often in contrasting tones than the ones that complement each other. One can also find a toy-like quality in the rendition of paintings like the Horse Rider where Husain’s skills in capturing movement can be seen. The galloping horse which became a signature feature of Husain’s works throughout his life is an ode to his days when he worked as a toymaker in Bombay as well as his childhood memories from his life in Indore, Madhya Pradesh.

In his work titled Zameen in the collection of National Gallery of Modern Art, New Delhi, which was painted at almost the same time period as the Bharat Kala Bhavan paintings, one can trace his efforts to search for the man and his roots.

These early works of Husain have an unmistakable impact of Cubism.  Husain’s genius lay in his application of Western techniques and traditions in themes and treatment that are undeniably Indian. There is a liberal application of primary colours – red, yellow, blue and green compartmentalising the painting into different parts.

He developed his own unique style of depicting reality through abstract shapes and accentuates the quality of the subject through careful application of colours.  For example, in A Saint bright red is used to make the rock lively and to add colour to a scene of penance. He demarcates his subjects in sharp, swift lines and then fills them with colours to separate them from the background which is filled almost monochromatically merging skylines and the ground. There is also an unmistakable impact of miniature paintings that the artist had become familiar with and greatly admired. 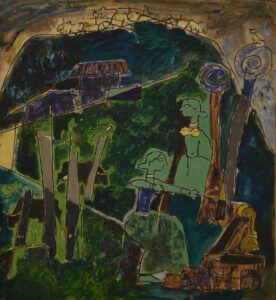 In many respects, his early works are not just a reflection of M.F. Husain the artist but also the times and how he saw the things that caught his eye.  His subjects are men and women from villages and streets, scenes of village life and people just out and about their daily life toiling and struggling. And yet, Husain never paints them in a romanticized manner. 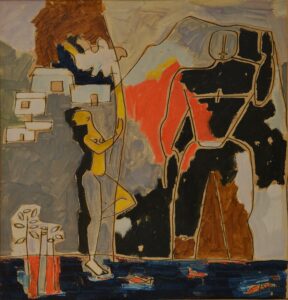 The subjects that he takes up for painting in these early works are reflective of their time (1953 – 1957) when it was almost uniformly fashionable to draw themes from rural life.

In his unique style Husain traces on canvas and paper the various scenes of village life, Village women at well, festival dance etc. 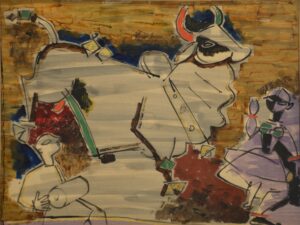 Husain had painted these works at a watershed moment in India’s past. The newly independent India had just emerged out of the colonial subjugation and was eagerly looking at a future full of Nehruvian optimism and confidence. Husain had sought to pictorialize what India had meant to him. His vision of an emerging nation was inclusive of the villages. These works were painted more than half a century ago yet their timelessness can be gauged from their continued relevance even today when the threats of climate change and globalization is threatening the rural fabric of the village life.