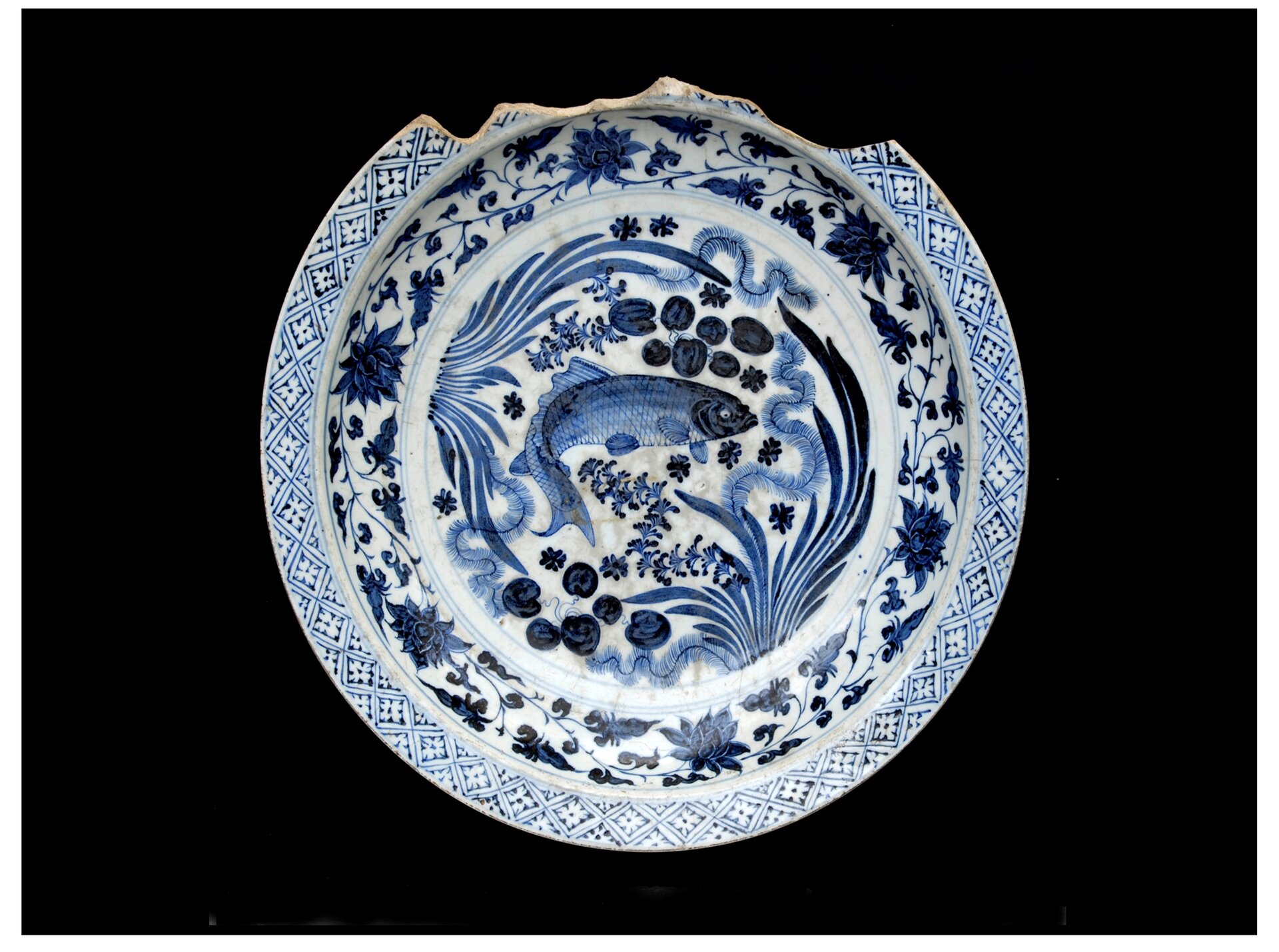 Porcelain is an exclusive ceramic which was originated in China. The qualities like its hardness, glossy shine and exceptional shapes made it distinct. It remained in huge demand among royals and rich merchants for a long time. Different varieties of porcelain were transported through the Silk Road (land) and the Spice Route (sea). One of its varieties, blue-and-white, was especially in high demand. It reached almost every corner of the world including India either by the way of gifts or through export.

A glimpse of Firozshah Kotla

Firozshah Tughlaq, during his reign (1351-1388 CE), ordered to build many forts, mosques, tombs in Delhi Sultanate. He even emphasised on repairing some existing forts and palaces. Amongst many forts and palaces built by his orders, the most popular one is Firozhshah Kotla. It was built in the city of Firozabad (the fifth city of Delhi). 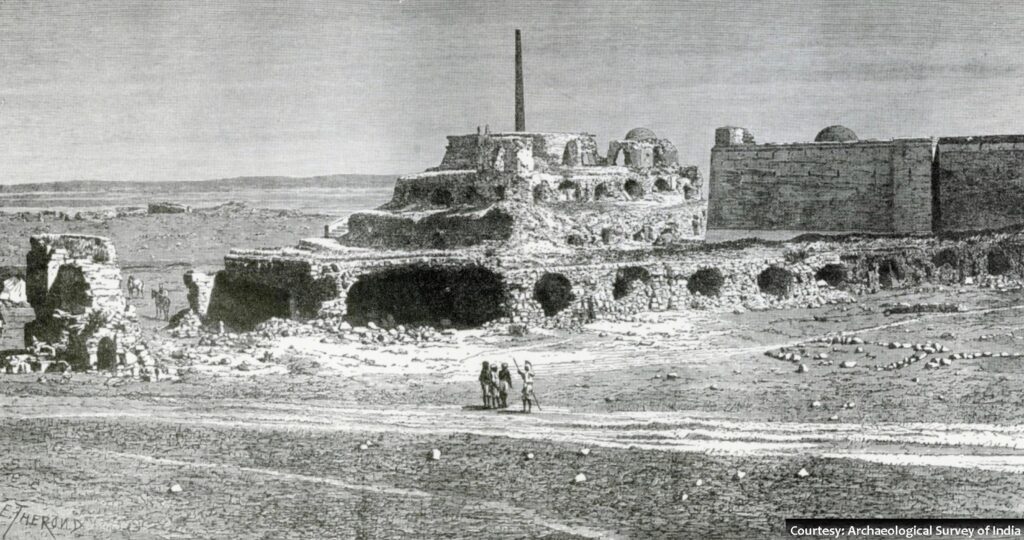 This collection of 14th century’s blue-and-white porcelain was discovered from the garden of Firozshah Kotla in 1960s. It was a chance discovery by the gardeners of the Archaeological Survey of India. While preparing beds for rose plantation, they found a heap of porcelain dumped in a pit at Firozshah Kotla Complex. It was taken out carefully but like other potteries belonging to this period, Chinese porcelain was not studied thoroughly by archaeologists. The importance of this magnificent hoard was not realised, and it was simply reported as ‘Mughal pottery and ornamental Mughal porcelain’. Presuming a variant of Mughal pottery, the entire collection was stored and not examined extensively.

In around 1970’s, this collection was studied and documented in detail by a scholar, Dr. Ellen Smart. Her notable work opened many doors for Indian Archaeologists, who later studied this collection enormously. However, plenty of potshards are still missing and site of Firozshah Kotla is yet to be excavated to trace them.

Literary references and archaeological evidence supported that Chinese blue-and-white porcelain had become popular in the 14th century CE. During this period, China was under the rule of a non-Chinese dynasty of Mongolian tribe who named themselves Yuan. During Yuan period, porcelain was exported all over the world and one of its finest collections was discovered at the Firozshah Kotla complex in Delhi. It might have reached Delhi Sultanate through the tough terrains of Central Asia which is popularly known as ‘the Silk Road’. Literary references have proved that porcelain, stacked carefully in large wooden boxes, were transported on double humped camels and horses through the regions of Central Asia. Other than Silk, porcelain was the second most prolifically exported item of trade using Silk Road.

During Medieval period, demand of porcelain enhanced manifold and it became particularly popular amongst Islamic rulers around the world. Tughlaqs might have also adored porcelain due to its charming quality, uniqueness, shape and size. Looking at the size of plates and bowls found at the site of Firozshah Kotla, it seems such pieces must have been used by Tughlaqs during royal gatherings and communal feasts.

Around 350 shards of porcelain in badly damaged condition were discovered from Firozshah Kotla. These were numbered and joined which formed 80 pieces of different shapes and sizes. Majorly, porcelain found in the collection includes small plates; large dishes or plates with flattened or foliated rims; deep bowls with straight or flaring rims. Looking at the designs and patterns, it is confirmed that all these porcelains were made in Jingdezhen kilns of China and might have been gifted to Tughlaqs during their rule in Delhi.

This collection was precious for Tughlaqs and that is why some broken plates were joined by riveting for re-use. It seems, due to its high value, even royal kitchen could not afford to discard broken porcelain. Another example of its love in the royal kitchen of Tughlaqs is a drilled inscription – matbah-e khas which means ‘special kitchen’. This inscription was found on the back side of many pieces and shows that it was marked specifically for the Tughlaq kings.

A plate with post-fired drilled holes made for riveting (left); and drilled inscription on a bowl (right)

Looking at the special status of porcelains, it is quite fascinating to imagine what kind of food might have been served in them. The illustrations of Nimatnama (which means ‘the Book of Delights’) perfectly showed the use of porcelains for serving various exclusive recipes. Compiled by Ghiyath Shah of Malwa in 15th century CE, paintings in the book demonstrate various recipes and serving of delicious dishes in plates and bowls of blue-and-white porcelains.

Porcelains depicted in Nimatnama can be compared with blue-and-white porcelains discovered at Firozshah Kotla. Comparison of shapes and designs of porcelains shows close resemblance and it seems some of the bowls and dishes depicted in Nimatnama might belong to Yuan period (14th century CE). Some patterns and designs on porcelain shown in the paintings of Nimatnama have also been noticed on the porcelain plates discovered from Firozshah Kotla. These paintings also shows different cuisines like biryani, samosa, halwa, etc. served in porcelain plates and bowls.  It somehow gives an idea that Tughlaqs might have also relished such dishes in porcelains during royal feasts. 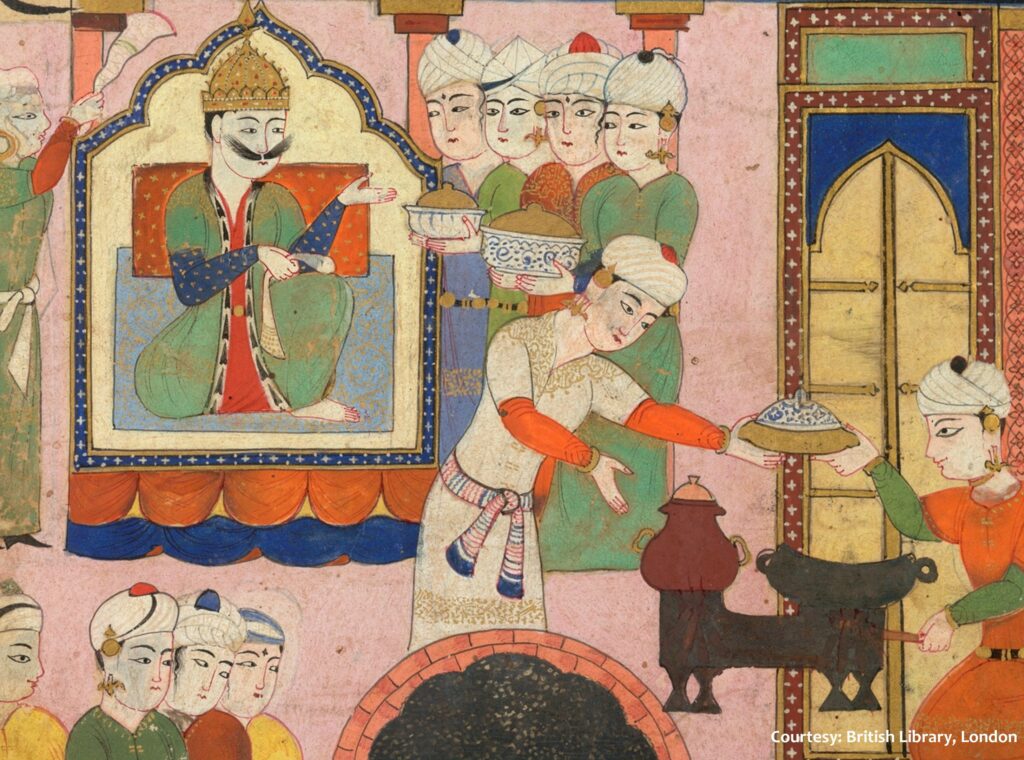 Serving of different dishes in blue-and-white porcelain bowl and tasting of food by the ruler of Malwa, Ghiyath Shah, Nimatnama [Click the above picture to see a video on ‘Blue-and-white Porcelain in Nimatnama and types of dishes served in it’]

Porcelain was one of the favourite items in the royal kitchen. It was possibly taken along wherever the king travels. But why sudden hate for porcelain by Tughlaqs and its discard by dumping in a pit at Firozshah Kotla?

Possibly, these blue-and-white porcelains were intentionally broken and probably dumped in a pit by the orders of Firozshah Tughlaq. Though, there is no clear evidence for this act but one probability is that somewhere in his life span, Firozshah Tughlaq became rigid and treated all kind of items with decorative motifs against their religion. As a result, he ordered to destroy all such items and ultimately this precious collection of 14th century’s porcelain was dumped in a pit.

Most of the porcelain pieces discovered from Firozshah Kotla are incomplete as many shards are still not discovered. It took years to complete the jigsaw puzzle of matching shards to form accurate shapes. This exhibition narrates journey of some exclusive blue-and-white porcelains shortlisted from the collection of Firozshah Kotla. These shortlisted porcelains are perfect examples of art and perfection which can be viewed here.